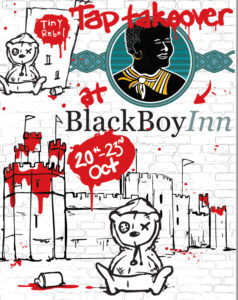 They will literally be doing a Tap Takeover, taking over everyone of our guest beer taps.

These guys really know their stuff and have won numerous awards for their beers and hard work over the years.

Tiny Rebel was started in 2010 by Brad and Gazz, 2 beer geeks who knew their stuff.  After 2 years of hard work and clocking up over 150+ brews they officially launched in Feb 2012 with two beers, Fubar and Urban IPA, both these beers have gone on to win numerous beer awards and the guys have also won many business awards as well as releasing 30 new beers in 2016!