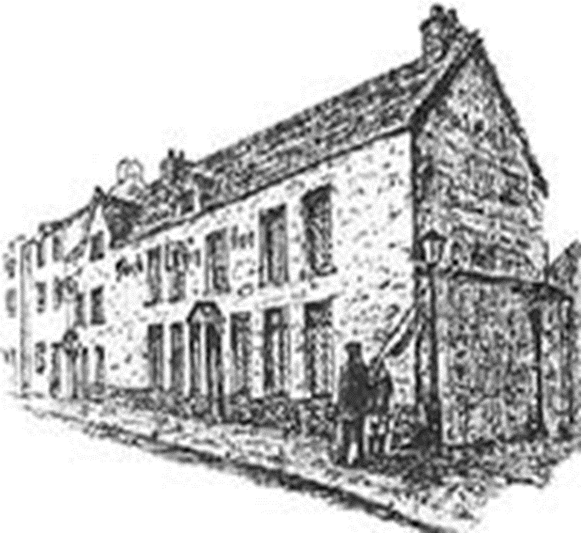 Britain comes to view. This is the Black Boy Inn an ancient tavern which boasts the date circa 1552 and is an institution which most people have heard about.

The Black Boy Inn, set within the Medieval Borough of Caernarfon, has been a welcome retreat for weary travellers for centuries.

An Inn would have accommodation for the tired passengers who would have travelled from Betws y Coed over the mountains in all sorts of bad weather. Public Houses did not offer such luxury as warm water and proper bed.

Located in Northgate Street, the Black Boy Inn is one of the few remaining free houses owned by an independent family business in the United Kingdom. It has load bearing walls of up to one and a half meters thick, and four exterior signs each showing a ‘black buoy’ on one side and a ‘black boy’ on the other.

Northgate Street in the language of the local people is know as Stryd Pedwar a Chwech which is Four and Sixpence Street. The story is that mariners came to the town and sought a bed for the night, but in the ‘Black Boy’ they would have a bed for four pennies and for six pennies, a bed, a bottle of gin and a woman to keep them warm.

Jack Black
The Inn’s name has caused controversy and there are at least three theories to explain its name. One is believed to come from a ‘black buoy’ which existed in the harbour in the early days of the Inn. Another refers to the nickname given to Charles II by his mother Henrietta Maria of France because of the darkness of his skin and eyes, as well as the fact that Royalists met at the Inn secretly at that time. Later, the place became the local fishermen’s favourite drinking place and the name of ‘black boy’ may come from this period

Northgate Street
The ‘North Gate’ archway found at the end of the Street was added in or about the 1820s.
In Caernarfon’s heyday as a port-town, Northgate Street was at the center of the town’s red-light district and known as ‘Stryd Pedwar a Chwech’ in Welsh, which translates as ‘Four and Six Street’. is ‘four shillings and sixpence’ For that not-too-princely sum, one could get a bed for the night, a bottle of Gin and services of a woman for the night!

One can see part of the town’s circular wall pattern from the Black Boy, where ten towers and three gates made it virtually impossible to surmount. The towers and well-preserved stone stairs which have the effect of doubling the wall’s thickness. With the Menai Strait, Afon Seiont and Cadnant (now in culverts) making it an Island Site. Master James of St. George, the Architect of King Edward told his master to build his Castle nd Town on this site. Caernarfon has been designated one of the best preserved Medieval Walled Towns in Europe.

It is hoped that eventually it will be possible to walk this section of the wall as far as the Eastgate gatehouse and the section from Porth yr Aur (the Westgate to Hanging Tower).as well

As Caernarfon grew with the Slate Industry, the Printing Works, the Markets larger wagons needed to enter the town so the archway at the end of Northgate Street is a 19th century addition to help facilitate the flow of traffic in and out of the old town.

Archaeological Interests
In the 1990s, excavations were conducted nearby, and an old woman’s skeleton was found. The archaeologists concluded that she had been buried there to save the expense of a funeral. More recently during restoration work at the Black Boy Inn, workmen uncovered a range of items underneath the dining room floorboards including a child’s shoe, clay pipes and, unusually, animal jaw bones.
For those with an interest in archaeology, there is a continuous programme of archaeological digs being carried out within the town walls by the Gwynedd.

Archaeological Trust.
Another interesting feature of the Black Boy Inn is the reported presence of the ghost of a nun seen passing through the Inn to the nunnery, which at one time was at the rear of the Inn. There is no evidence that Caernarfon did have a Nunnery, but a Priory was located where a shop now stands.

The Eastgate
This gate was the main entrance to the old walled town and therefore the most carefully guarded. Originally built at the same time as the Castle with an external barbican and wooden drawbridge, this was subsequently replaced by a fixed six-arched bridge-way.
The rooms above the gateway served to accommodate the Exchequer in 1284, as the administration and financial center for the counties of Caernarfon, Anglesey and Meirioneth. The town’s curfew bell was also originally housed in the Bell Tower before being moved. Any inhabitant not inside the town wall by 8pm was locked out till 6am the following morning.

At one time, a large gas-light illuminated clock with four faces was housed within its high tower. This had to be removed owing to it misleading sailing vessels trying to negotiate their way into the Harbour at night. In the 1830s it was also used as a lock-up and watch house.

In 1767 the upper floors were adapted as a town guild hall. Other alterations in 1833 and 1873 are commemorated by a slate tablet set into the archway entrance. There are now plans afoot to convert the old gatehouse into a means of reaching the Town Wall Walk and possibly a small exhibition area.

The pub has been graded as a Grade II listed building, being a rare example of a surviving 17th century hostelry that still retains some original interior detail