Caernarfon Castle is undoubtedly a top attraction in North Wales, especially with it being one of the most impressive castles found in the UK. The entire fishing town of Caernarfon is within the castle’s walls, and it has been deemed a UNESCO World Heritage Site, making it a premier destination for a family day out. Here are some interesting facts about the castle, so you can impress your friends and family when you visit.

The Mightiest of the Iron Ring

Edward I of England was a ferocious and unrelenting King, and he was set on conquering Wales; which he finally did in 1282 when he defeated the last Prince of Wales, Llywelyn ap Gruffudd. He then defined his power over the Welsh rebels by building a number of fortresses – Caernarfon was by far the most ambitious of the new castles, making it the mightiest of the so-called Iron Ring, a series of fortresses in North Wales which has been called one of the best and biggest medieval building projects.

The design for Caernarfon is a little unusual when compared to the other castles in the region, such as Beaumaris and Conwy. It is best to picture the structure as a figure eight; at the middle of the castle, the walls narrow into each other, effectively forming two large and symmetrical courtyards. Surrounding the central courtyards are thick, reinforced walls on all sides. The walls extend back from the bay, and then wrap around the old town of Caernarfon, meaning that the whole place is securely held within the stone castle.

The costs Edward incurred whilst building Caernarfon Castle also indicate that it was the biggest project in the area. Around £22,000 was spent on the build of Caernarfon Castle, which is more money than he would have taken in tax in one year. Hundreds of skilled tradesmen and craftsmen worked on the castle, with timber being shipped from Liverpool and Anglesey, and labourers even coming in from London! It’s not just the huge price tag that makes Caernarfon impressive, the works were completed within five years, which was incredibly quick for the 1200s!

One of Caernarfon Castle’s most appealing characteristics is the 12 fantastic octagonal towers. The style of the towers differs from the other castles in the area, they were much harder to build. It is believed that the design of the octagonal towers was chosen to evoke Constantinople, now Istanbul in Turkey. Multicoloured stones were used in order to mirror the Byzantine city. The towers are large, the Eagle tower measures a staggering 10 metres across at the base.

Caernarfon Castle can only be entered through one of two gatehouses, the King’s Gate which faces the town, and the Queen’s Gate which faces the sea. The Queen’s Gate was almost exclusively used for unloading supplies from ships. The King’s Gate was something else entirely; built with holes and slots, this was done in order to provide defence to the castle. Boiling hot oil and water could be poured over people through the holes and slots, and arrows could also be shot.

Today, the castle is a tourist attraction that is recognised worldwide. Visitors can enjoy exploring the many rooms, passageways and towers at their leisure. The castle is also home to the Museum of the Royal Welch Fusiliers in the Queen’s Tower – the exhibition explores the long history of the Welch Fusiliers regiment, with uniforms, guns, medals and memorabilia on display. 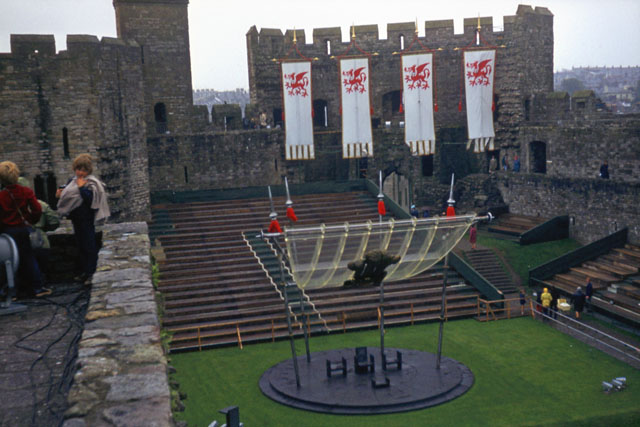 The UK still has a Prince of Wales, namely Prince Charles, and the investiture, or ‘coronation’ which is the ceremony that givers the Prince his official title took place in Caernarfon Castle in 1969. This year marked the 50 year anniversary of Prince Charles investiture.

Coronavirus Information Regarding Black Boy Inn’s Commitment to our Customers